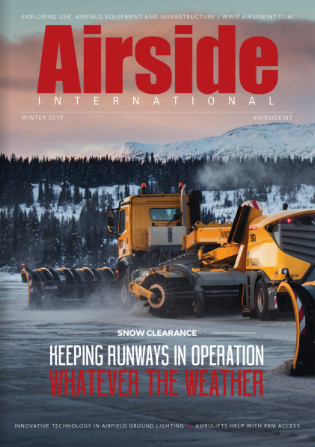 Posted at 12:03h in news by Zahida Wiffen 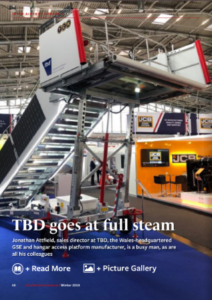 Such has been the demand for TBD’s products in recent times that over just the last calendar year sales have risen by something like 50%. Over that same period, the company has taken on about 20% (thereby adding about 20% to its workforce); most of them are engineers, but TBD has also hired new sales reps, new customer service representatives and other support staff.

Needing to ramp up production, the company looked at opening an entirely new production facility, but in the end settled on moving to a two-shift system (of eight hours each) at its Bridgend plant.

“We’ve had more and more enquiries for products and more and more success across tenders that TBD has entered into,” Attfield observes. “Everything is going flat out!”.

There has been plenty of success in the company’s core domestic UK market – one notable win has seen TBD supply TPS 2435 narrowbody aircraft passenger stairs to Rushlift for DHL handling operations at London Gatwick, as well as other markets in Europe.

Meanwhile, two big projects have been launched in North America to supply equipment such as engine lifts to two of the US conglomerate General Electric’s huge facilities at Raleigh in North Carolina and Cincinnati in Ohio. There’s also been strong demand for TBD products from Delta Airlines in North America.

Product development has continued apace with this burgeoning demand. TBD’s strategy is to supply high-quality yet affordable GSE and access platforms. It is important that its GSE meets the latest requirements of the International Air Transport Association’s Air Handling Manual (AHM) 913, Attfield confirms.

One example of how TBD achieves this high-quality/affordable combination can be seen in its popular passenger stairs product that were on show on the company’s stand at Inter Airport. These self-propelled stairs feature: an anti-collision approach system that slows them through three phases, and one in which any collision is automatically electronically logged by the control system; a wide control station platform at the top of the stairs, which ensures that control is handled from the best vantage point; and electric drive. The last of these is an ever-more popular option, although Attfield notes that sufficient charging infrastructure remains in short supply at many airports.